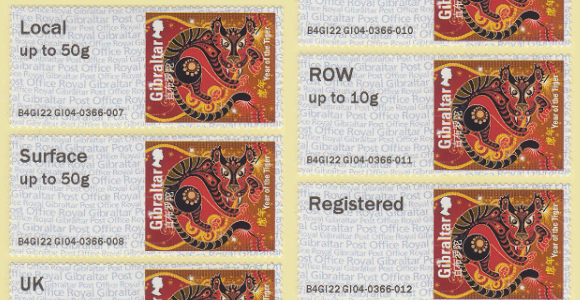 Post & Go machines issue a new generation of self-adhesive postage stamps that are rapdily capturing the interest of stamp collectors. The stamps were first introduced by the Royal Mail back in 2008. Gibraltar is proud to issue a new set of Post & Go for the Lunar new year, Year of the Tiger

The Tiger is the third of all zodiac animals. According to one myth, the Jade Emperor said the order would be decided by the order in which they arrived to his party. The Ox set off the night before and was first. Tiger arrived early the next morning and was second. Rat secretly climbed onto Ox and jumped down when he saw the Jade Emperor. Ox and Tiger were pushed back to second and third. Despite his protests, Tiger could only settle with being the third zodiac. The Tiger is also associated with the Earthly Branch and the hours 3-5 in the morning. In the terms of yin and yang, the Tiger is yang. Tigers are courageous and active people who love a good challenge and adventure in life. In Chinese culture, tigers are seen as the guardian of children. Infants and babies wear shoes and hats with tiger designs to protect against evil spirits. Paired with the Celestial Stems, there is a 60-year calendrical cycle. Although yín is associated with wood, the years also cycle through the five elements of nature.

Post & Go - Year of the Tiger
Also available as