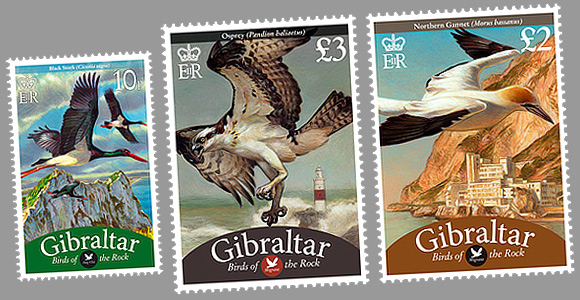 The three new stamps are additional values to the Definitive ‘Birds’ issued in during 2008. The Birds featured are the Osprey, Northern Garnet and Black Stock. All stamps illustration have been produced by world renowned nature artist Jonathan Pointer.

These stamps are a wonderful addition to the 2008 Definitive issue.

Gibraltar has long been known as a key location for observing the migration of birds. Gilbert White, in his Natural History of Selbourne (1788) referred to his brother John's observations of passage from his outpost on the Rock. In more recent times, the location of the Rock of Gibraltar has been used to count and sample migration of raptors, seabirds and passerines and near-passerines. Observations from the area of the Strait have contributed to a long list of publications on bird migration in the area

Since the creation in 1987 by the Gibraltar Ornithological & Natural History Society of the Strait of Gibraltar Bird Observatory observations became more systematic. Between 1987 and 1992 regular observations were made of seabirds passing Europa Point, an observation point overlooking the Straits of Gibraltar. Between 1987 and 1990 regular transects were made of Windmill Hill Flats to record grounded migrants (Cortes 1996). Bird of prey observations have also been made regularly, in particular since 1987. From 1991 to the present the There has been an increase in bird ringing studies, with contributions to the Piccole Isole project and the European Science Foundation (ESF) programme on Palaearctic-African migrants.Methods
Observations of birds of prey are carried out from well established points on the Upper Rock, overlooking the Straits during the northward passage and overlooking the isthmus to the north during the southward passage. Observations are mainly during westerly winds and duringdaylight hours. Observations at Europa Point are for a minimum of one hour. For the ringing operation mist nets are used at the Jews' Gate site on the Upper Rock Nature Reserve, an area of Mediterranean matorral dominated by Olive Olea europaea and Lentisc Pistacia lentiscus. The total maximum length of the line of nets is 800 m, with an average of 400m used at any one time. Ringing is carried out on days of suitable weather from February to June and August to November.

The various programmes are revealing important information on migration across the Straits of Gibraltar. Of note for example are the large numbers of black redstarts Phoenicurus ochruros being processed, more than at any other single site in Europe.

Information gathered by the Strait of Gibraltar Bird Observatory is contributing to increasing knowledge of aspects of migration such as passage periods and changes therein and, in particular the ringing studies, to aspects of migration biology, as work currently in preparation will show.