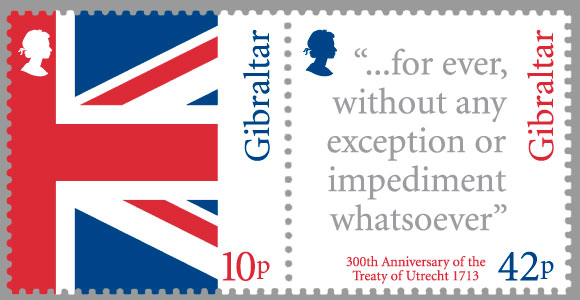 Article X of The Treaty of Utrecht 1713 (English translation)

The Catholic King does hereby, for himself, his heirs and successors, yield to the Crown of Great Britain the full and entire propriety of the town and castle of Gibraltar, together with the port, fortifications, and forts thereunto belonging; and he gives up the said propriety to be held and enjoyed absolutely with all manner of right for ever, without any exception or impediment whatsoever.

But that abuses and frauds may be avoided by importing any kind of goods, the Catholic King wills, and takes it to be understood, that the above-named propriety be yielded to Great Britain without any territorial jurisdiction and without any open communication by land with the country round about.

Yet whereas the communication by sea with the coast of Spain may not at all times be safe or open, and thereby it may happen that the garrison and other inhabitants of Gibraltar may be brought to great straits; and as it is the intention of the Catholic King, only that fraudulent importations of goods should, as is above said, be hindered by an inland communications. it is therefore provided that in such cases it may be lawful to purchase, for ready money, in the neighbouring territories of Spain, provisions and other things necessary for the use of the garrison, the inhabitants, and the ships which lie in the harbour.

But if any goods be found imported by Gibraltar, either by way of barter for purchasing provisions, or under any other pretence, the same shall be confiscated, and complaint being made thereof, those persons who have acted contrary to the faith of this treaty, shall be severely punished.

And Her Britannic Majesty, at the request of the Catholic King, does consent and agree, that no leave shall be given under any pretence whatsoever, either to Jews or Moors, to reside or have their dwellings in the said town of Gibraltar; and that no refuge or shelter shall be allowed to any Moorish ships of war in the harbour of the said town, whereby the communication between Spain and Ceuta may be obstructed, or the coasts of Spain be infested by the excursions of the Moors.

But whereas treaties of friendship and a liberty and intercourse of commerce are between the British and certain territories situated on the coast of Africa, it is always to be understood, that the British subjects cannot refuse the Moors and their ships entry into the port of Gibraltar purely upon the account of merchandising. Her Majesty the Queen of Great Britain does further promise, that the free exercise of their religion shall be indulged to the Roman Catholic inhabitants of the aforesaid town.

And in case it shall hereafter seem meet to the Crown of Great Britain to grant, sell or by any means to alienate therefrom the propriety of the said town of Gibraltar, it is hereby agreed and concluded that the preference of having the sale shall always be given to the Crown of Spain before any others.