50th Anniversary of the Treaty of Rome 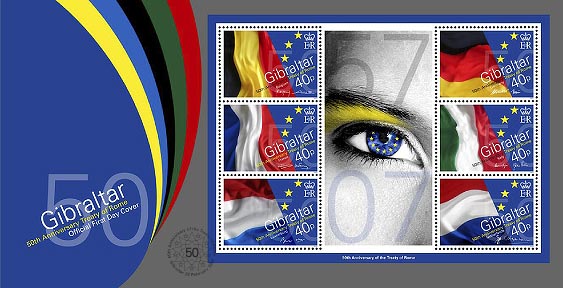 50th Anniversary of the Treaty of Rome (view technical specs)

The Treaty of Rome established the European Economic Community (EEC) and was signed by France, West Germany, Italy, Belgium, the Netherlands and Luxembourg (the latter three as part of the Benelux) on March 25, 1957. The treaty's original full name was the Treaty establishing the European Economic Community. The original Treaty was amended by all the subsequent treaties; the Treaty of Nice sought to consolidate all treaties into one document but the EC Treaty as amended remains a single section within this, with its own article numbering. Though the entry in force of the Treaty of Maastricht in 1993 was a further step in the direction of European integration, most decisions of the institutions of the Union are still taken on the legal basis of EC Treaty, which remains the main source of communitary legislation.﻿