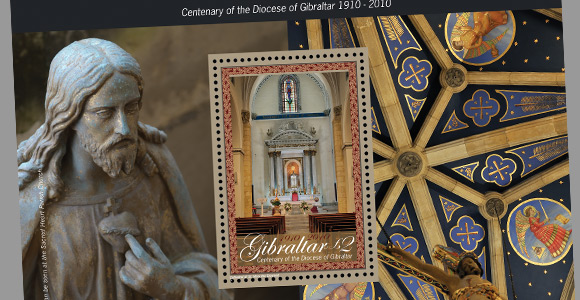 10 November 1910: Pope St. Pius X promulgated the decree establishing the new Diocese of Gibraltar. He also appointed Rev. Gregory Thompson a Benedictine monk from St. Augustine’s Monastery, Ramsgate, England, which was affiliated to the Monte Cassino branch of the Order. Unfortunately, a mixture of settling difficulties and Spanish language problems, caused the Bishop to resign, returning to his monastery in 1927.

October 1927: Bishop Richard J. Fitzgerald became the new Bishop of Gibraltar. His has been the longest tenure of office thus far, spanning the difficult World War II years and especially the exceedingly troubled post-war repatriation period of the civilian population which had been evacuated to London, Northern Ireland, Jamaica and Madeira. He died in 1956, at a time when the Spanish claim of Gibraltar was beginning to re-emerge under the dictatorship of General Francisco Franco.

11 October 1956: Bishop John Farmer Healy succeeded Bishop Fitzgerald. His episcopate witnessed the closure of the land Frontier and all communications with the neighbouring hinterland, effectively a siege of Gibraltar by Spain in modern times. This was undoubtedly a crucial moment for Gibraltar, much

as the War and the evacuation had been. In a Referendum held by Britain, the population overwhelmingly voted to remain British and refused any relinquishing of sovereignty to Spain. As a result, the British Government established a Constitution for Gibraltar by which limited self-rule was accorded in the form of internal government over defined domestic matters. Bishop Healy was deeply devastated when the new governmental system that was drawn up under the new Constitution effectively ensured the almost complete take-over of the entire education system out of the hands of the Church. Only the Church private school ran by the Loreto nuns remains to this day.

7 October 1973: Bishop Edward Rapallo was consecrated on the Rock as the first Gibraltarian Bishop of Gibraltar. His episcopate saw the implementation of the changes brought about by the Second Vatican Ecumenical Council which heralded the reform of the Catholic Church to better address and reflect the challenges facing the modern-day world situation. In spite of the fact these were far from easy times for Gibraltar, both politically and economically, the saintly Bishop was outstanding in his efforts to invigorate the pastoral initiatives in the Church. He was responsible for introducing some very successful lay movements that gave a new sense of dynamism and purpose to the laity, and to this day still play an important part in the life of the Church. His motto Super Hanc Petram, ‘Upon this Rock’, appropriately reflected that the Catholic Church in Gibraltar was by now firmly established as a Diocese. Bishop Rapallo died unexpectedly on the 5th February 1984.

6 January 1985: Rome appointed Mgr. Bernard Patrick Devlin as the new Bishop of Gibraltar. He had arrived on the Rock from Ireland shortly after the Second World War and had made this his home, working as a priest and eventually becoming the Vicar General during Bishop Rapallo’s episcopate. Pope John Paul II consecrated him in Rome on the Feast of the Epiphany. His episcopate is notable for having ordained the largest number of priests for the Diocese and for having continued to consolidate the good work of his renowned predecessor. In addition, during his time as Bishop, Sr. Jennifer Gomila became the first Gibraltarian woman to join the enclosed Order of Discalced Carmelites at Ronda, Spain. Under the current Code of Canon Law, every bishop of the Catholic Church must tender in his request for retirement upon reaching 75. Pope John Paul II accepted his retirement, thereby becoming the first ‘Bishop Emeritus of Gibraltar’ to reside on the Rock.

24 May 1998: Mgr. Charles Caruana, who had been appointed by Pope John Paul II, was consecrated by the late Cardinal George Basil Hume OSB in a ceremony in Gibraltar held in an RAF hangar adapted for the occasion and attended by thousands of Gibraltarians from all sectors of society. He is the second Gibraltarian to have been appointed as Bishop of Gibraltar. The motto he chose, well encapsulates his fresh, optimistic approach as the chief Shepherd of Catholics in Gibraltar: Sapientia et Amor Dei, ‘Wisdom and the love of God’. His retirement request was accepted on 18 March 2010 and the much-loved Bishop died on 1 October 2010 following a bout of ill health.

Diocese of Gibraltar
Also available as