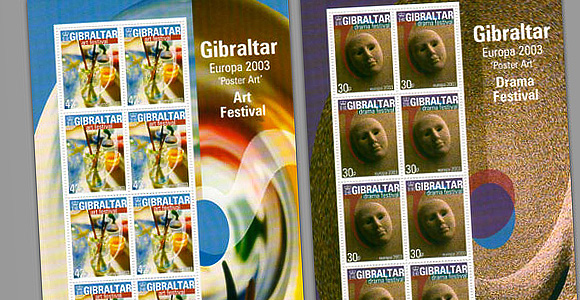 The Europa 2003 'Festivals' set focuses on the major cultural festivals in Gibraltar each year, the Drama festival, the Spring Festival, the Art Festival and the Dance Festival.

The common design reappeared in 1958 and continued until 1973. From 1974 the designs reflect a common theme. The common design idea replaced the common theme in 1984, which was the CEPT 25th Anniversary (1959-84) and shows a symbolic bridge, said to represent Liaison, Exchange and Communication. With the split of posts and telecoms providers in most countries, CEPT is no longer responsible, but the postal authorities under the guidance of PostEurop continue the Europa tradition. From 1993 all the stamps have "Europa" inserted into the design in small print. (Source Wikipedia) ﻿