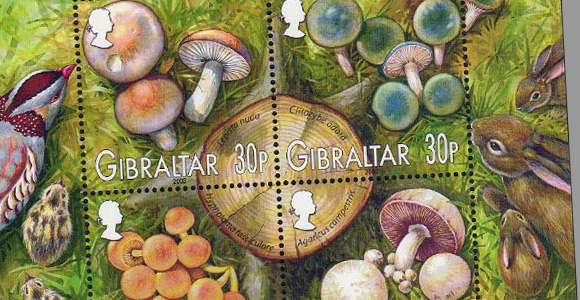 The set features mushrooms found in Gibraltar such as the edible 'Lepista nuda' (also known as the wood blewit) which is especially common where there is a large amount of duff built up on the forest floor; the 'Clitocybe odora', a blue-green mushroom that grows near deciduous and coniferous trees and found growing in small groups along the side of tree roots, the bitter and poisonous 'Hypholoma fasciculare' a common woodland mushroom, often in evidence when hardly any other mushrooms are to be found and the 'Agaricus campestris', known as the 'field mushroom' is a widely eaten gilled mushroom closely related to the cultivated button mushroom Agaricus bisporus.

Mushrooms of Gibraltar
Also available as