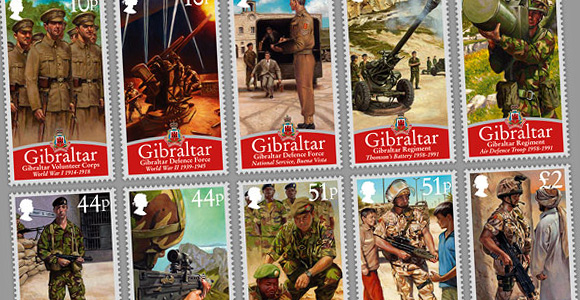 The desire of the Gibraltarians to defend their homeland alongside the Garrison dates as far back as 1755 when the Genoese Guard mounted pickets at the land frontier. The Gibraltarians stepped forward again for the two World Wars, first as the Gibraltar Volunteer Corps and later the Gibraltar Defence Force (GDF). The GDF comprised artillery batteries and specialist sub-units. It was retained after the war to serve as a training establishment for National Service, becoming the Gibraltar Regiment in 1958. In 1971 HM The Queen granted Colours to the Regiment and on the same day the Regiment received the Freedom of the City of Gibraltar. In 1991 the Gibraltar Regiment took over duties as the resident battalion and was re-roled as an infantry unit. On Regimental Day in 1999 HM The Queen granted the Royal Title. The Regiment is responsible for the defence and security of Gibraltar, with tasks including Force Protection, offensive operations and assistance to civil powers in areas such as Public Order and Counter-Terrorism. The Regiment trains annually in UK and Morocco, working closely with the Joint Helicopter Force. Commitments in Africa have increased recently, with the Regiment providing training teams in Gambia, Senegal and Nigeria. The Regiment’s soldiers have served in every major British operation since 1991 including the first Gulf War, the Balkans, Northern Ireland and Sierra Leone, with soldiers currently in Iraq and Afghanistan.