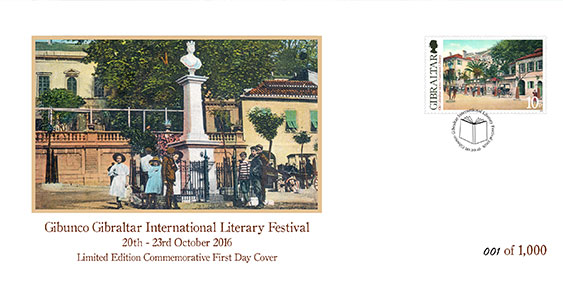 A limited edition First Day Cover has been issued to commemorate the 2016 Gibraltar Literary Festival. The First Day Covers are limited to ONLY 1,000 copies and are individually numbered.

The Gibunco Gibraltar Literary Festival has become an important part of Gibraltar's cultural calendar which has proved such a success in opening up the Rock as a major cultural venue to the rest of Europe.
The festival has become one of the most outstanding literary events in the English speaking world, featuring an impressive constellation of distinguished novelists, historians, biographers and public figures from Britain. The festival allows for constant interaction between authors and audiences, as people are able to purchase the books on sale at the different venues and then have them signed personally by the authors after each event, with an added opportunity for exchanging views and impressions on the talks.
History, literature, popular culture, politics, religion and the world of ideas all feature heavily in the programme. The eclectic nature of the festival is underlined by the multitude of events which include the appreciation of gastronomy, art appreciation, jazz music and poetry. The festival now in its fourth year takes place October 20-23 and is now honoured to have received royal patronage from HRH the Princess Royal.