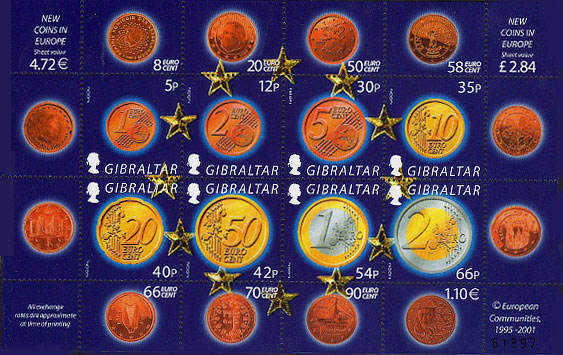 There are eight euro coins, ranging in value from one cent to two euros (each euro is divided into a hundred cents). The coins first came into use in 2002. They have a common reverse, portraying a map of Europe, but each country in the eurozone has its own design on the obverse, which means that each coin has a variety of different designs in circulation at once.[1] Three European microstates which use the euro as their currency also have the right to mint coins with their own designs on the obverse side.

The coins, and various commemorative coins, are minted at numerous national mints across the European Union to strict national quotas. Obverse designs are chosen nationally, while the reverse and the currency as a whole is managed by the European Central Bank (ECB).

All coins have a common reverse side showing how much the coin is worth, with a design by Belgian designer Luc Luycx.[1] The design of the 1-, 2-, and 5-cent coins symbolises Europe's place in the world as a whole.