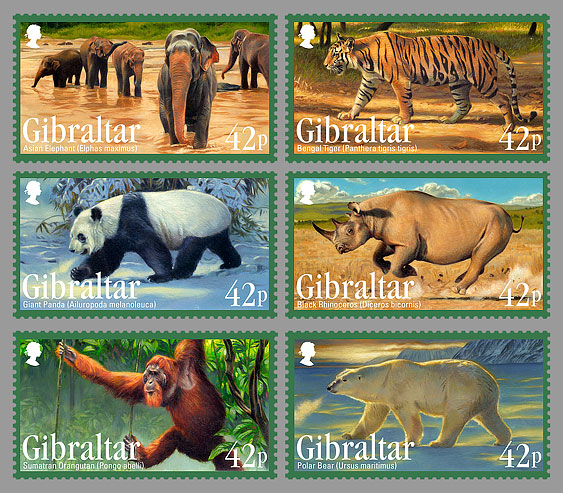 The Asian Elephant (Elephas maximus) is the only living species of the genus Elephas and distributed in Southeast Asia from India in the west to Borneo in the east. Since 1986, it has been listed as endangered by IUCN as the population has declined by at least 50% over the last three generations, estimated to be 60–75 years. The species is threatened by habitat loss, degradation and fragmentation.

The Black Rhinoceros (Diceros bicornis), is a species of rhinoceros, native to the eastern and central areas of Africa including Kenya, Tanzania, Cameroon, South Africa, Namibia, Zimbabwe, and Angola. Recent conservation success has led to very gradual population increases to about 4,000 after a long and devastating period of hunting and poaching. However, the species remains Critically Endangered due to the strong demand for rhinoceros horn for traditional Asian medicines.

The Giant Panda (Ailuropoda melanoleuca) is a bear native to central-western and south western China. The giant panda lives in a few mountain ranges in central China, mainly in Sichuan province, but also in the Shaanxi and Gansu provinces. The panda is a conservation reliant endangered species. Wild population is estimated at about 1,590 individuals living in the wild.

The Bengal Tiger (Panthera tigris tigris), is a tiger subspecies native to India, Bangladesh, Nepal and Bhutan, and has been classified as endangered by IUCN as the population is estimated at fewer than 2,500 individuals with a decreasing trend. None of the Tiger Conservation Landscapes within the Bengal’s tiger range are large enough to support a population size of 250.

The Polar Bear (Ursus maritimus) is a bear native largely within the Arctic Circle encompassing the Arctic Ocean, its surrounding seas and surrounding land masses. The polar bear is classified as a vulnerable species, with eight of the 19 polar bear subpopulations in decline. For decades, large scale hunting raised international concern for the future of the species but populations rebounded after controls and quotas began to take effect.

The Sumatran Orangutan (Pongo abelii) is one of the two species of orangutans. Found only on the island of Sumatra, in Indonesia, it is rarer and smaller than the Bornean orangutan. In the wild, Sumatran orangutans survive in the province of Nanggroe Aceh Darussalam (NAD), the northernmost tip of Sumatra. The species has been assessed as critically endangered on the IUCN Red List since 2000. It is considered one of “The World’s 25 Most Endangered Primates.”

Endangered Animals
This issue is available as