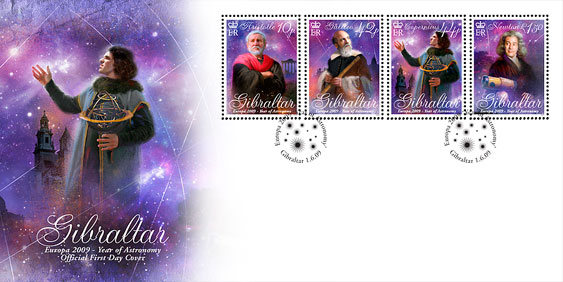 The Europa 2009 ‘Year of Astronomy’ Gibraltar stamp issue marks the 400th anniversary of the first use of an astronomical telescope by Galileo Galilei and pays tribute to Aristotle, Galileo, Copernicus and Newton. The aim of the Year is to stimulate worldwide interest, especially among young people, in astronomy and science.
Aristotle was a Greek philosopher who treated astronomy in the abstract, linking it to his overall philosophical world picture. Galileo Galilei was an Italian physicist, mathematician, astronomer, and philosopher who played a major role in the Scientific Revolution. Nicolaus Copernicus’s book, De revolutionibus orbium coelestium (On the Revolutions of the Celestial Spheres), is often regarded as the starting point of modern astronomy and the defining epiphany that began the Scientific Revolution. Sir Isaac Newton was an English physicist, mathematician, astronomer, natural philosopher, alchemist, and theologian and one of the most influential men in human history. In this work, Newton described universal gravitation and the three laws of motion which dominated the scientific view of the physical universe for the next three centuries, advancing the scientific revolution.

Europa 2009 'Year of Astronomy'
This issue is available as