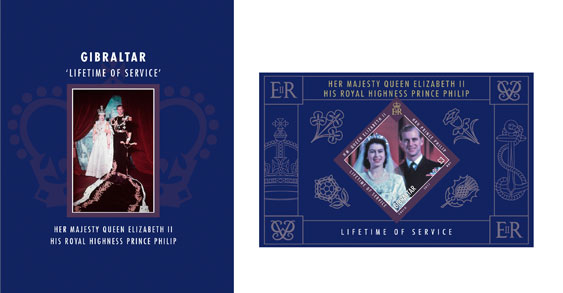 Gibraltar celebrates 60 years of the reign of Her Majesty Queen Elizabeth II with a remarkable issue. The stamps and products depict Her Majesty and HRH Prince Philip through the decades in photo album form representing the royal couple from their earliest years together to the present day.

Of note is a large diamond-shaped miniature sheet containing 6 stamps and two labels with its custom-made, oversize FDC and pack.

Elizabeth II (Elizabeth Alexandra Mary, born 21 April 1926) is the constitutional monarch of 16 independent sovereign states known as the Commonwealth realms: the United Kingdom, Canada, Australia, New Zealand, Jamaica, Barbados, the Bahamas, Grenada, Papua New Guinea, the Solomon Islands, Tuvalu, Saint Lucia, Saint Vincent and the Grenadines, Belize, Antigua and Barbuda, and Saint Kitts and Nevis. In addition, as Head of the Commonwealth, she is the figurehead of the 54-member Commonwealth of Nations and, as the British monarch, she is the Supreme Governor of the Church of England.

Prince Philip, Duke of Edinburgh (born Prince Philip of Greece and Denmark; 10 June 1921) was born into the Greek and Danish royal families, but his family was exiled from Greece when he was a child. He was educated in Germany and Britain at schools run by the German Jewish educator Kurt Hahn. At the age of 18, he joined the British Royal Navy, in which he served during World War II, even though two of his German brothers-in-law fought on the opposing side. After the war, in March 1947, he renounced his titles, adopted the surname Mountbatten from his British maternal grandparents, and used the style “Lieutenant Philip Mountbatten”. Later that year, he married Princess Elizabeth, the eldest daughter and heir presumptive of King George VI. On his marriage, he was granted the style of His Royal Highness and the title of Duke of Edinburgh by his father-in-law. When Elizabeth became Queen in 1952, Philip left his naval career to act as her consort. His wife made him a Prince of the United Kingdom in 1957. He is Britain’s longest-serving consort and the oldest serving spouse of a reigning monarch.

HM QE II, Prince Philip 'Lifetime of Service'
This issue is available as