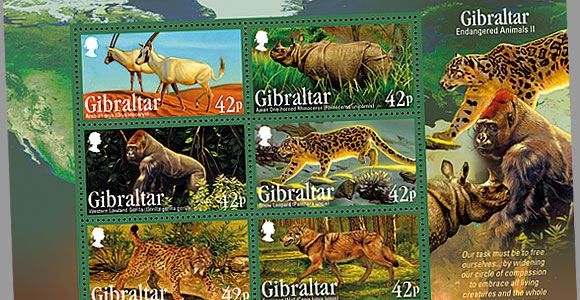 The Arabian Oryx (Oryx leucoryx) is a medium-sized antelope with a distinct shoulder hump, long, straight horns, and a tufted tail. It is a bovid, the smallest member of Oryx genus, native to desert and steppe areas of the Arabian Peninsula. The Arabian oryx was extinct in the wild by the early 1970s, but was saved in zoos and private preserves and reintroduced into the wild starting in 1980. In 1986, the Arabian oryx was classified as endangered on the IUCN Red List, and in 2011, it was the first animal to receive Vulnerable status again after having been listed as extinct in the wild. It is listed in CITES Appendix I. As of 2011, populations were estimated at over 1000 individuals in the wild, and 6000 - 7000 individuals in captivity worldwide.

The Asian One-horned Rhinoceros (Rhinoceros unicornis) belongs to the Rhinocerotidae family. Listed as a vulnerable species, the large mammal is primarily found in parts of north-eastern India and in protected areas in the Terai of Nepal, where populations are confined to the riverine grasslands in the foothills of the Himalayas. Typically weighing between 1,600 to 3,500 kg, it is the fourth largest land animal. The Indian rhinoceros once ranged throughout the entire stretch of the Indo-Gangetic Plain but excessive hunting reduced their natural habitat drastically. Today, about 3,000 rhinos live in the wild, 2,000 of which are found in India’s Assam alone.

The European Wolf (Canis lupus lupus) also known as the Eurasian Wolf is a subspecies of gray wolf which has the largest range among wolf subspecies and is the most common in Europe and Asia, ranging through Mongolia, China, Russia, Scandinavia, Western Europe, the Himalayan Mountains and north-western Turkey, on the Thracian Peninsula. Compared to their North American cousins, Eurasian wolves tend to have longer, more highly placed ears, narrower heads, more slender loins and coarser, tawnier coloured fur. Compared to Indian wolves, these wolves are larger with longer, broader skulls. In Europe, wolves rarely form large packs as their lives are more strongly influenced by human activities so they tend to be more adaptable than North American wolves in the face of human expansion.

The Iberian Lynx (Lynx pardinus), is is a critically endangered species of felid native to the Iberian Peninsula in Southern Europe. It is one of the most endangered cat species in the world. According to the conservation group SOS Lynx, if this species died out, it would be one of the few feline extinctions since the Smilodon 10,000 years ago. The species was formerly classified as a subspecies of the Eurasian lynx (Lynx lynx), but is now considered a separate species. Both species occurred together in central Europe in the Pleistocene epoch, being separated by habitat choice. The Iberian lynx is believed to have evolved from Lynx issiodorensis.

The Snow Leopard (Panthera uncia) is is a moderately large cat native to the mountain ranges of Central Asia. They occupy alpine and subalpine areas generally 3,350 and 6,700 metres (10,990 and 22,000 ft) above sea level in Central Asia. The Snow Leopard Survival Strategy (McCarthy et al. 2003, Table II) compiled national snow leopard population estimates. Many of the estimates are acknowledged to be rough and out of date, but the total estimated population is 4,080–6,590. However, the global snow leopard effective population size (those likely to reproduce) is suspected to be fewer than 2,500 (50% of the total population, or 2,040–3,295).