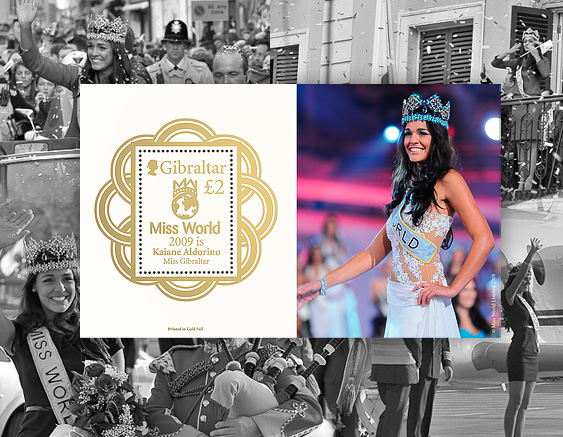 The first ‘Miss World’ pageant (originally a festival bikini contest in honour of the recently introduced swim wear of the time) was contested in 29th July 1951 in London crowning Sweden’s Kerstin “Kicki” Håkansson as the first Miss World. Compared to its modest beginnings the show now attracts an estimated TV audience of over a billion.
The 59th Miss World pageant was held on December 12th 2009 at the Gallagher Convention Centre in Johannesburg, South Africa. 112 contestants from all over the world competed for the crown, marking the biggest turnout in the pageant’s history. Gibraltar’s Kaiane Aldorino, aged 23, was crowned Miss World 2009.Kaiane won Miss World Beach Beauty en route to the top prize sparking off mass celebrations in Gibraltar as the population watched the event unfold live on television.
Kaiane was flown to Gibraltar from London on a private jet on the 17th December where she was greeted at Gibraltar Airport by Government, family and friends. From there, Kaiane was paraded down Main Street on an open-top car (the same one used by Charles and Diana when they visited Gibraltar to embark the Royal Yacht Britannia to start their honeymoon cruise) preceded by the band of the Royal Gibraltar Regiment and then appeared at the City Hall balcony. The celebrations culminated with a fireworks display from Gibraltar Harbour. All in all it was described as the most significant homecoming in history.

Miss Gibraltar 2009 is Miss World
This issue is available as