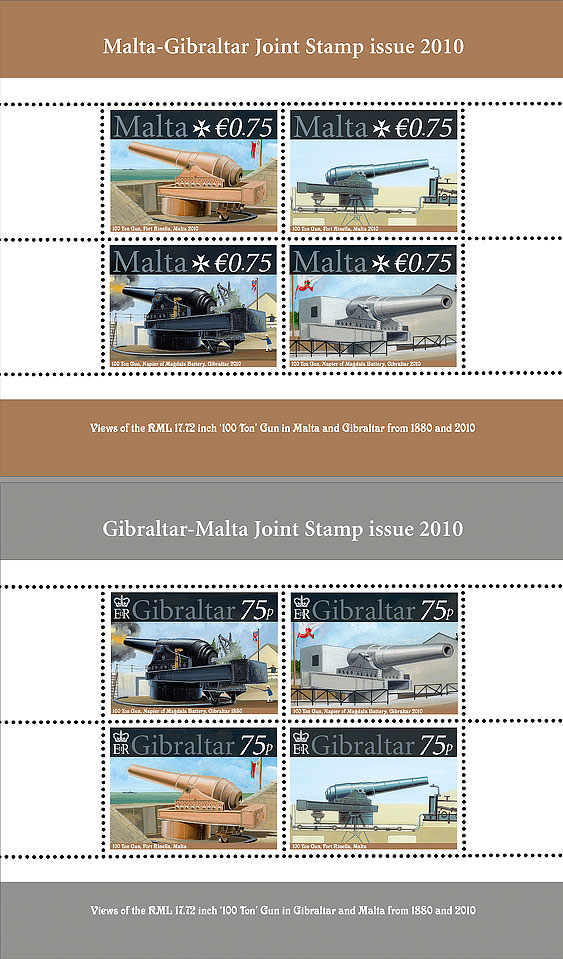 A joint issue is the release of stamps by two or more countries to commemorate the same topic, event or person of relevance to both countries. Joint stamp issues are highly regarded and should have the same day of issue. Their design is often similar or identical, except for the identification of country and value. Joint Stamp issues are a great example of cooperation between two countries, this this case Malta and Gibraltar.

The RML 17.72 inch (450 mm) guns (‘100-ton gun’) were rifled muzzle-loading guns made by Elswick Ordnance Company in the United Kingdom. They were mounted on two Regia Marina battleships, and also in fortifications at Gibraltar and Malta.

When Gibraltar commanders heard of these big guns they asked for some. Two of the four ordered for Malta were delivered here. The first battery was Napier of Magdala, on Rosia Bay, Gibraltar, and the second, called Victoria, was placed one kilometer north.

Construction started in December 1878, with the first ready in 1883 and the second in 1884. At that time, the Duilio-class ships had been operational for around seven years, leaving a gap in Malta defenses.

The first gun was transported by HMS Stanley (a special cargo vessel) adapted for the task and delivered on 19 December 1882. The second was delivered on 14 March 1883. These two guns were ready on their mounts on July and September 1883.
The first firings took place in 1884, but the weapons were not fully operational until 1889 due to hydraulic system problems.

The Malta guns were placed on Fort Rinella, completed in 1884, and Fort Cambridge, ready in 1880. The first ammunition load comprised all the models available, included 50 AP and 50 HE. Shrapnel, once fired, was not replaced, being considered not so effective.
Stanley delivered two guns: Rinella received its on 31 July 1883 and mounted it 12 January 1884, and Cambridge respectively on 16 September 1882 and 20 February 1884.
The work to make these machines serviceable was so great that until 1885 there were no firing tests. Between 1887 and 1888 the activity was stopped due the need to rework hydraulic systems, but nevertheless these guns were considered quite reliable, serving for more than 20 years.

Another problem took place: during firing trials on 5 March 1880, one of Duilio’s guns cracked while firing at the maximum charge. At the suggestion of the British Army, it was officially established that the maximum practical charge was 204 kg and not 255.
One of the British guns was also cracked: Napier gun, during a fire trial, had the barrel cracked, it this case because the crew managed to fire one shot for every 2.5 minutes. This wrecked gun was not easily repairable; it was used as a foundation for a building, and was replaced with the other, because Fort Napier was deemed more effective. The Malta guns were phased out in 1906, as was Napier’s. They had fired their last shots several years before, in 1903 and 1904. During the First World War the guns at Malta were claimed to have been ready for use when SMS Goeben was known to be nearby. Although the 100 ton guns were powerful, they would have been totally outclassed by modern weapons: the range and rate of fire were too low, as modern 280–305 mm guns had over 15–20 km range and the rate of fire of one shot every 30 seconds. Goeben would have had no difficulty firing against Malta guns, if needed.

Napier and Rinella’s guns are still intact. Rinella Fort also exists today, and is under the guardianship of Fondazzjoni Wirt Artna - the Malta Heritage Trust.
The Gibraltar 100 Ton Gun is a very popular tourist site in Gibraltar and well-preserved by the Gibraltar Government.

Gibraltar-Malta Joint Issue
This issue is available as