Ceremony of the Keys / Governor of Gibraltar 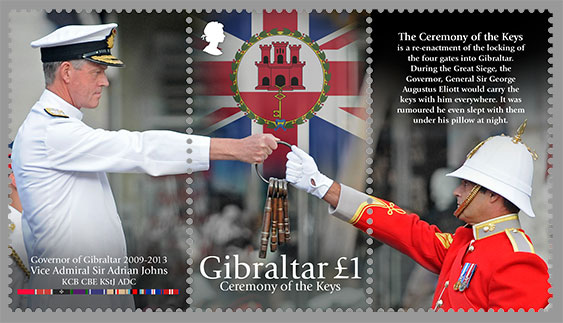 Ceremony of the Keys / Governor of Gibraltar (view technical specs)

Ceremony of the Keys - Governor of Gibraltar

The Ceremony of the Keys - Whenever His Excellency the Governor hosts an official banquet for honoured guests, the Port Sergeant will march into the dining hall in slow time preceded by a single drummer. He reports to the Governor:

“Your Excellency, the fortress is secure and all’s well!”

Since the capture of the Rock in 1704, the keys of Gibraltar, which opened the sea and land gates of the Fortress, have symbolised the possession of the Fortress by Great Britain. The keys have come to be regarded as the seal of office of His Excellency the Governor of Gibraltar and as such are handed over from one Governor to the next.

During the Great Siege (1779-1783), the Governor, General George Agustus Elliot, the first Baron Heathfield, constantly wore the keys at his belt except when he handed them to a sergeant who held the appointment of Port Sergeant. As the sunset gun was fired, the Port Sergeant, accompanied by an armed escort, would proceed to lock the gates to the fortress for the night. The keys would then be returned to the Governor for safekeeping. Legend has it that General Elliot would sleep with the keys to the fortress under his pillow. The following morning, the Port Sergeant would again collect the keys, re-open the gates and hand back the keys to the Governor.

After peace was restored in 1783, drums and fifes accompanied the Port Sergeant and his escort, warning aliens to leave the Rock before the gates were closed for the night. This procedure was carried out each evening without interruption for approximately 140 years. However, it was discontinued some time after the First World War. The event was then revived in 1933 and it is still carried out today in the format known as the Ceremony of the Keys. This ceremony is held once a year at the Grand Casemates Square. There, the re-enacting of the firing of the sunset gun, the posting of an Outpost Platoon and the locking up of the gates is carried out ceremonially in the presence of His Excellency the Governor for the benefit of all visitors to the Rock.

Since 1978 and at the instigation of the then Governor, General Sir William Jackson, the post of Port Sergeant has always been held by a member of The Royal Gibraltar Regiment. The Port Sergeant is always in attendance to His Excellency the Governor when he is carrying out an official ceremonial function. The appointment of Port Sergeant is carried out by regular Senior Non Commissioned Officers in the Regiment between the ranks of Sergeant and Warrant Officer Class two and is considered to be a great honor for the individual in post.

Vice Admiral Sir Adrian Johns, Governor of Gibraltar 2009-2013 - In a naval career spanning 35 years, Adrian Johns served in a total of 13 ships, starting life as a submariner, then specialising as an aviator and, finally, commanding HMS OCEAN, Britain’s largest warship, during combat operations in Iraq.  In all, he commanded five times at sea in every rank from Lieutenant to Captain.  He also served in five appointments in the Ministry of Defence.  Amongst these, he was Principal Staff Officer to the Chief of the Defence Staff and was later Assistant Chief of Naval Staff.  He retired from the Navy as Second Sea Lord and Commander-in-Chief Naval Home Command in November 2008 and took up his appointment in Gibraltar in October 2009.

Since his time as Governor and Commander and Chief of Gibraltar, Sir Adrian has proven to be one of, if not indeed the hardest working and most popular of Governors, that Gibraltar has ever had. He has always pushed to ensure that he achieved the best possible outcome for the people of Gibraltar.

In keeping with Sir Adrian’s charterer of giving and supporting many charities locally, it has been decided that 25 pence of the total value of the stamp shall go towards Cancer Relief Gibraltar.

Although Sir Adrian and Lady Johns have left Gibraltar, their legacy shall live on; they will undoubtedly forever be Gibraltar’s finest and dearest patrons.