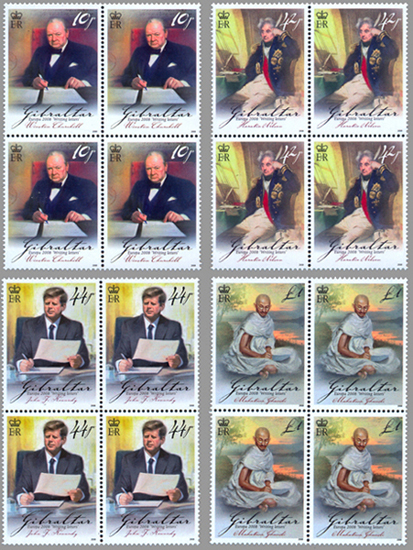 The Europa 2008 theme of ‘Writing letters’ inspired us to feature historical figures and how significant their letters were...
John F. Kennedy, at the height of tensions during the Cuban Missile Crisis in 1962 wrote to his Soviet Union counterpart Krushchev: “...the United States of America will respect the inviolability of Cuban borders, its sovereignty, that it take the pledge not to interfere in internal affairs, not to intrude themselves and not to permit our territory to be used as a bridgehead for the invasion of Cuba, and will restrain those who would plan to carry an aggression against Cuba, either from U.S. territory or from the territory of other countries neighbouring to Cuba.” Kennedy had agreed to remove all missiles set in Turkey on the border of the Soviet Union in exchange for Khrushchev removing all missiles in Cuba. Through correspondence, the Cuban Missile Crisis that could have jeopardized world peace was officially over.
Churchill’s correspondence with Roosevelt over Operation Torch is fascinating for us in Gibraltar: “...I hope however that you have considered the following points: (a) Will not British participation be disclosed by the assembly of British small craft and aircraft at Gibraltar for some time beforehand? (b) Would it not be disclosed at the time of landing whatever flag we wear? (c) Would not initial fighting necessarily be between French and British aircraft and French batteries and British ships? (d) If the approach and landing take place in the dark as is indispensable to surprise, how will the Americans be distinguished from British? In the night all cats are grey...”.
Gandhi was said to have a “therapeutic influence” on his followers and an ability to “repair wounds in self-esteem”. Gandhi believed in the universality of the human condition and in a moving letter he wrote from a Birmingham jail said “Injustice anywhere is a threat to justice everywhere.” Words of wisdom indeed.
Nelson wrote for the first time with his left arm to Admiral of the Fleet John Jervis, 1st Earl of St. Vincent “A left-handed admiral will never again be considered as useful; therefore the sooner I get to a very humble cottage the better; and make room for a sounder man to serve the state.” His first letter to Lady Nelson was written under the same opinion “It was the chance of war and I have great reason to be thankful: and I know it will add much to your pleasure to find that Josiah, under God’s providence, was principally instrumental in saving my life. I shall not be surprised if I am neglected and forgotten: probably I shall no longer be considered as useful; however, I shall feel rich if I continue to enjoy your affection...”

Europa 2008 'Writing Letters'
This issue is available as