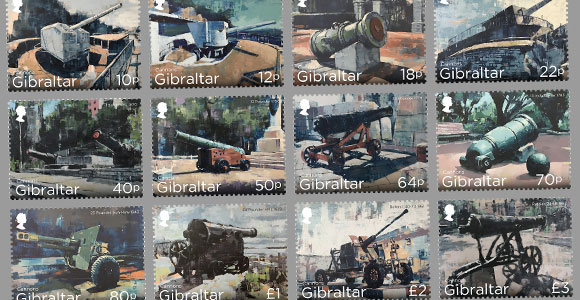 Gibraltar’s fortifications have made the Rock of Gibraltar one of the most fought over and most densely fortified locations in Europe. The peninsula, has great strategic importance as a result of its position by the Straits where the Mediterranean Sea meets the Atlantic Ocean. The set of twelve stamps feature cannons which have been utilized to defend Gibraltar during historic events such as the Great Siege and the Second World War. The illustrations featured on the stamps are actual representations of the cannons at their current state and have been commissioned to Gibraltarian artist Mr Leslie Gaduso.

The depicted cannons are found at different locations throughout Gibraltar and serves as one of Gibraltar’s popular tourist attractions. Featured cannons;