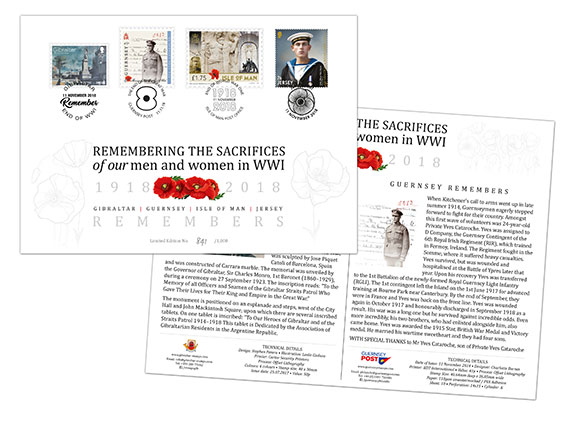 ONLY 25 LEFT in stock!! Sold on a first come first served basis

A special commemorative limited edition envelope will be issued by Britain’s Crown Dependencies and Overseas Territory Guernsey, Isle of Man, Jersey and Gibraltar on 11 November 2018 to mark 100 years since the signing of the Armistice Treaty.

The collaboration brings together one stamp from each of the postal administrations’ First World War issues released in recent times to commemorate 100 years of the Great War. The stamps, which are cancelled with the date 11.11.18, are affixed to a specially designed envelope entitled ‘Remembering the Sacrifices of our Men and Women in WWI – Gibraltar, Guernsey, Isle of Man, Jersey Remembers’.

A card inserted into the envelope tells the story of each of the stamps;