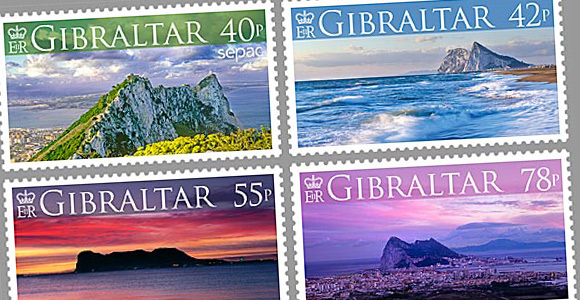 The Rock of Gibraltar lies at the southernmost tip of the Iberian Peninsula. It covers seven square kilometres dominated by the famous limestone rock which rises to 425m above sea-level at its highest point and towers above the Strait of Gibraltar, the strategic waterway which connects the Mediterranean and the Atlantic Ocean.
Africa lies directly opposite just 9 miles away and the Moroccan City of Tangier is 32 miles away at the western end of the Straits.
The name Gibraltar is derived from the Arabic name Jabal Tariq meaning “mountain of Tariq”, or from Gibel Tariq, meaning “rock of Tariq”. It refers to the geological formation, the Rock of Gibraltar, and the Berber Umayyad general Tariq ibn-Ziyad, who led the initial incursion into Iberia in advance of the main Moorish force in 711. Earlier, it was known as Mons Calpe, one of the Pillars of Hercules.
This was the ancient name given to the promontories that flank the entrance to the Strait of Gibraltar: the northern or European Pillar is the Rock of Gibraltar and the southern or African Pillar most likely either Monte Hacho in Ceuta (Spain) or Jebel Musa in Morocco.
The Pillars of Hercules has its origin in Greek mythology, named after the ancient Greek hero Heracles (Hercules in Latin).When Hercules had to perform twelve labours, one of them was to fetch the Cattle of Geryon in Spain and bring it to Eurystheus. On his way to the island of Erytheia he had to cross the mountain that was once Atlas. Instead of climbing the great mountain, he cut corners and put his mind to work. He decided to use his great strength to smash through the colossal mountain that used to be
a colossal giant. Hercules split it in half using his indestructible mace or club (Myths vary). By doing so, he connected the Atlantic Ocean to the Mediterranean Sea and formed the Strait of Gibraltar. One part of the split mountain is Gibraltar and the other is either Monte Hacho or Jebel Musa . These two mountains taken together have since then been known as the Pillars of Hercules. ﻿