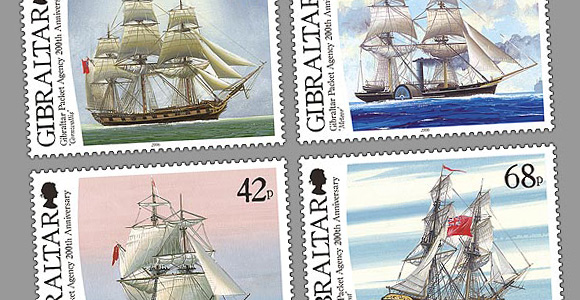 In these days of instant communication it is difficult to conceive the difficulties that existed regarding mail communication 200 years ago. After Gibraltar came under the British crown in 1704, mail was carried by ships whose Masters agreed to carry packets. However over one hundred years later, the Gibraltar Packet Service was created and commenced in July 1806. The first Gibraltar marks on letters were then introduced by the Packet Agency. After the first Packet Agent, John Hardcastle, had been in post for a few months, he asked for some marks that he could use to apply to letters. Two were produced: an arc with the name "Gibraltar", and a further arc reading "Gibraltar Paid". They were the first marks to be used on Gibraltar mail to denote that a letter had originated in Gibraltar in early 1807.

The set comprises of four stamps featuring specially commissioned illustrations on the HMP Cornwallis, HMP Meteor, HMP Carteret and HMP Prince Regent who regularly brought mail to and from Gibraltar during the 1800’s.