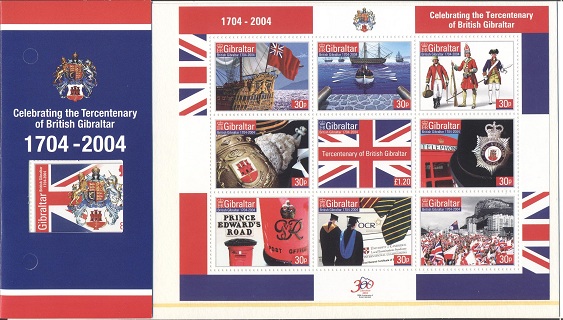 "I have much pleasure in sending my warmest wishes to the people of Gibraltar for the coming year, which marks the tercentenary of Gibraltar's links with the United Kingdom. It has been an important relationship, rich in history and incident. Gibraltar holds a special place in the affections of the British people. I am delighted that the Princess Royal will have the opportunity to meet some of those who live on the Rock when she makes her first official visit to Gibraltar in Spring. I shall be following with interest the success of the commemorative events to mark the tercentenary, many of which will involve members of Britain's armed forces. I wish you all a very happy and prosperous tercentenary year."
HM Oueen Elizabeth II.
To commemorate the Tercentenary of British Gibraltar a Miniature Sheet of 9 stamps depecting (from left to right, top to bottom) the 'Royal Katarine' with Admiral Sir George Rooke aboard, arriving in 1704; British Merchants landing in Gibraltar; the Foxes Marine, Royal Artillery and Royal marines from the 18th century; a depiction of Gibraltar's judiciary system featuring the Mase; the UK flag, Gibraltar's phone booths and police hat; local post pillar boxes; our educational system and finally the people of Gibraltar celebrating in the streets with Gibraltar and UK flags. ﻿

Tercentenary of British Gibraltar
This issue is available as