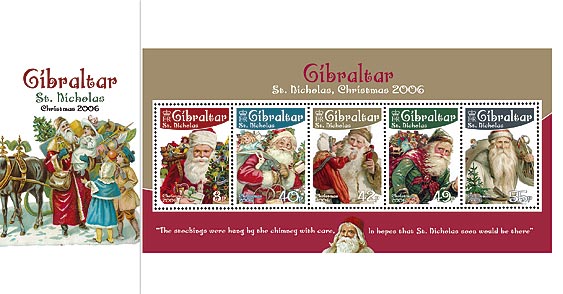 The true story of Santa Claus begins with Nicholas, who was born during the third century in the village of Patara. At the time the area was Greek and is now on the southern coast of Turkey. His wealthy parents, who raised him to be a devout Christian, died in an epidemic while Nicholas was still young. Obeying Jesus' words to "sell what you own and give the money to the poor," Nicholas used his whole inheritance to assist the needy, the sick, and the suffering. He dedicated his life to serving God and was made Bishop of Myra while still a young man. Bishop Nicholas became known throughout the land for his generosity to the those in need, his love for children, and his concern for sailors and ships.
The commercial success of Santa Claus threatens to completely obscure the story of St. Nicholas, the beloved patron saint of children depicted in our stamps. It's been a long journey from the Fourth Century Bishop of Myra, St. Nicholas, who showed his devotion to God in extraordinary kindness and generosity, to America's jolly Santa Claus but the fact remains, St. Nicholas embraced the true meaning of Christmas: the celebration of the birth of Jesus Christ. (Researched from www.stnicholascenter.org)
Special thanks for Nancy Rosin for her images from her incredible collection for this and the 2005 Christmas stamps!

Christmas 2006 'St. Nicholas'
This issue is available as