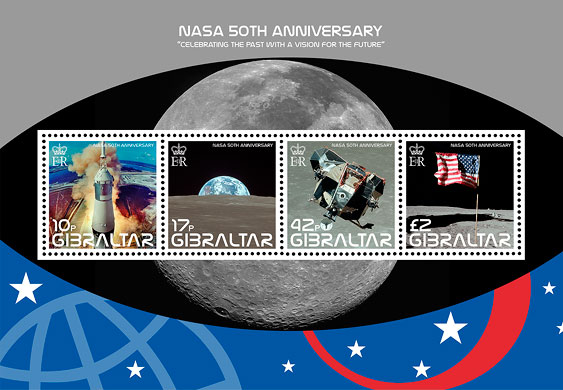 The National Aeronautics and Space Administration (NASA) is an agency of the United States government, responsible for the nation’s public space program. NASA was established on July 29, 1958, by the National Aeronautics and Space Act.
In addition to the space program, it is also responsible for long-term civilian and military aerospace research. Since February 2006 NASA’s self-described mission statement is to ‘pioneer the future in space exploration, scientific discovery, and aeronautics research.’ NASA’s motto is: ‘For the benefit of all’.
In 2008 NASA celebrated “50 years of scientific and technological excellence”. NASA has “powered us into the 21st century through signature accomplishments that are enduring icons of human achievement. Among those accomplishments are technological innovations and scientific discoveries that have improved and shaped our lives on Earth in a myriad of ways”.
Gibraltar wishes to celebrate NASA’s achievements by issuing a miniature sheet with four stamps depicting one of the most loved and memorable moments of the 20th Century when the Apollo 11 mission set off to land the first man on the moon. As NASA’s new goal is to have astronauts back on the moon by 2020 what better way to pay tribute than to recall the last trip! The agency has scheduled unmanned missions between 2008 and 2011 to map out landing sites and to find a spot for a permanent moon base.
The Apollo 11 mission was the first manned mission to land on the Moon. It was the fifth human spaceflight of the Apollo program and the third human voyage to the moon. Launched on July 16, 1969, it carried Commander Neil Alden Armstrong, Command Module Pilot Michael Collins and Lunar Module Pilot Edwin Eugene ‘Buzz’ Aldrin, Jr. On July 20, Armstrong and Aldrin became the first humans to land on the Moon, while Collins orbited above.
The mission fulfilled President John F. Kennedy’s goal of reaching the moon by the end of the 1960s: “I believe that this nation should commit itself to achieving the goal, before this decade is out, of landing a man on the Moon and returning him safely to the Earth” (1961 speech).

NASA 50th Anniversary
This issue is available as