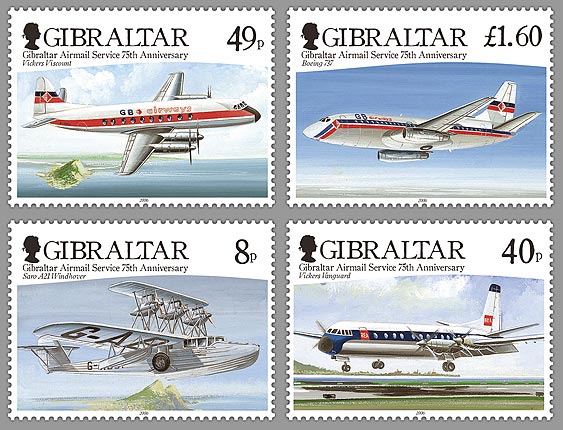 Gibraltar has boasted from having an Airmail Service since 1931 thanks to the entrepreneurial spirit that still runs through a local company commonly known as GB Airways today. At the gateway to the Mediterranean, a Saro Windhover amphibian aircraft took off from Gibraltar in 1931 heading for Tangier and so too began GB Airways’ journey as an airline of firm repute and vision. The airline’s speciality within the Mediterranean and North Africa today can also be traced back to those early years of aviation. Throughout this time, GB Airways has continued as a private, family-owned company with each generation making its own distinctive mark and has continuously offered an airmail service to and from the Rock on behalf of the people of Gibraltar.

The four stamps on this set feature specially commissioned illustrations on some of the planes that have been in service during the past 75 years in Gibraltar, from the earlier models such as the Saro A21 Windhover to the more recent and still in operation Boeing 737.

Gibraltar Airmail Service 75th Anniversary
This issue is available as